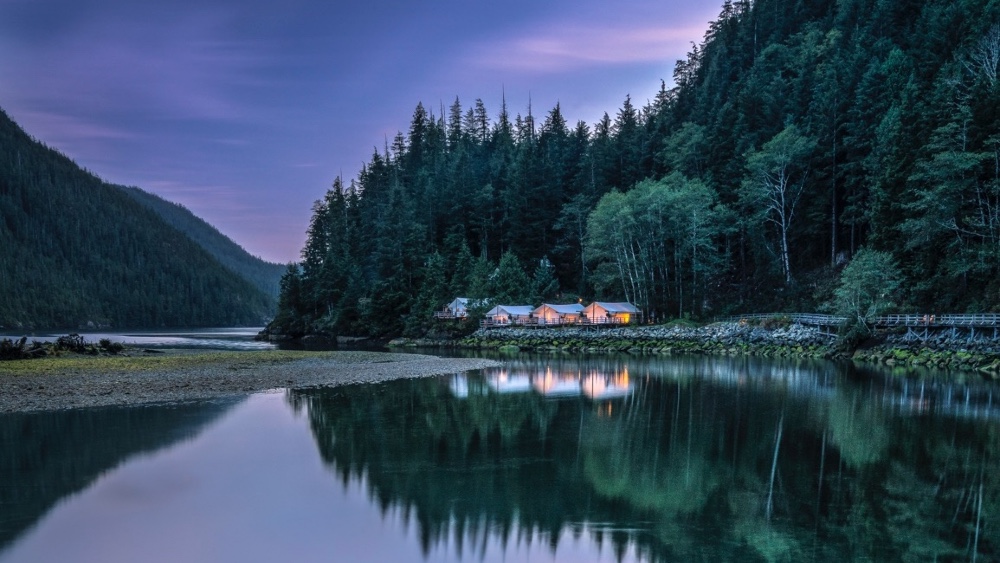 Just in time for the re-opening of the US-Canadian border (assuming, of course, you meet all the  requirements), Vancouver Island’s famed Clayoquot Wilderness Lodge is back—and with a brand-new look, to boot. Synonymous with off-the-grid luxury, the secluded retreat was, like many properties, closed for an extended period due to the pandemic. But in this case, the hiatus offered the property’s new co-owners, Australia-based luxury hotel operator Baillie Lodges, time to complete a $1.6 million makeover, realizing a vision that began when Hayley and James Baillie first landed at Clayoquot in 2019.

“Straight away, we saw the synergies with our existing Baillie Lodges properties,” says Hayley Baillie, whose company is known for such iconic Down Under boutique hideaways as Longitude 131° at Uluru-Kata Tjuta, Silky Oaks Lodge in Queensland’s Daintree Rainforest, Capella Lodge on Lord Howe Island and Southern Ocean Lodge on Kangaroo Island (which is currently being rebuilt following the 2020 bush fires.)

The main synergy here is the remote location—in Clayoquot’s case, its setting on the banks of its namesake inlet, surrounded by the lush conifer forests of the Clayoquot Sound UNESCO Biosphere Reserve and only accessible by seaplane, boat or helicopter. Other key factors include an immersion in wilderness, proximity to endemic wildlife (like bears, sea otters, dolphins and whales) and a classic design offering organic interaction with the environment, with guest tents opening right onto Clayoquot Sound or into the dense old-growth rainforest.

Shortly after taking the reins in partnership with KSL Capital, the Baillies launched a multi-year strategy to elevate the guest experience and align Clayoquot with the company’s growing portfolio. They have refurbished all 25 luxuriously appointed safari-style guest tents, commissioning local designers to create a more contemporary, yet still authentic, sense of place.

Moy Sutherland, a Tlaoquiaht First Nations artist from the nearby village of Masayaht, was invited to feature his traditional bentwood boxes and bowls throughout the tents and common areas, while local handwoven textiles studio Cloth Tone created organic raw wool-covered cushions using wool produced on Vancouver Island. Design elements common to all the Baillie Lodges properties are also in place, including sumptuous Bemboka blankets and upscale bedding; each tent also has a private deck and heated bathroom floors, while some also feature outdoor cedar showers and cast-iron stoves.

Guest can arrive by helicopter, and book private flights to take in the scenery.  Courtesy Clayoquot Wilderness Lodge

Plans are underway to renovate the Cookhouse Restaurant, Ivanhoe Lounge and Healing Grounds Spa after the 2022 season wraps. For now, the restaurant continues the Baillie Lodges’ focus on local and sustainable by serving daily changing menus full of ingredients like foraged forest mushrooms, organic beef and freshly caught octopus and prawns. Dinner is a three-course affair, and the lengthy selection of included beverages features local craft beers and ciders, spirits distilled in British Columbia and wines from around the world. Don’t miss enjoying a cocktail at sunset on the rooftop or in the Ivanhoe Lounge, which has floor-to-ceiling windows and a deck with firepits.

With this new look also comes a renewed spirit of adventure. Clayoquot is equally famous for its broad range of exhilarating activities, and reimagined versions of these signature experiences now form part of the personalized, all-inclusive guest itineraries (which also include all dining and beverages). Designed to showcase the natural beauty of British Columbia’s coast, popular excursions include Zodiac rides to spot whales and bears, snorkeling among salmon in pristine rivers, horseback riding, archery, hiking and guided mountain biking and rock climbing. Spa treatments (which use ingredients like Pacific Coast seaweed), mindfulness activities like yoga and sound healing, and scenic helicopter flights are available for an additional charge.

“We hope that guests will be as awestruck as James and I were when we first flew on a seaplane into the majestic Clayoquot Sound,” says Baillie, “and that they will depart with a real sense of having experienced the sights, sounds and feels of Vancouver Island’s wild west coast.” Rates start at approximately $1,120 per person, per night, including accommodation, gourmet meals, premium beverages, most activities and one 60-minute massage per stay. Children over six years old are welcome.