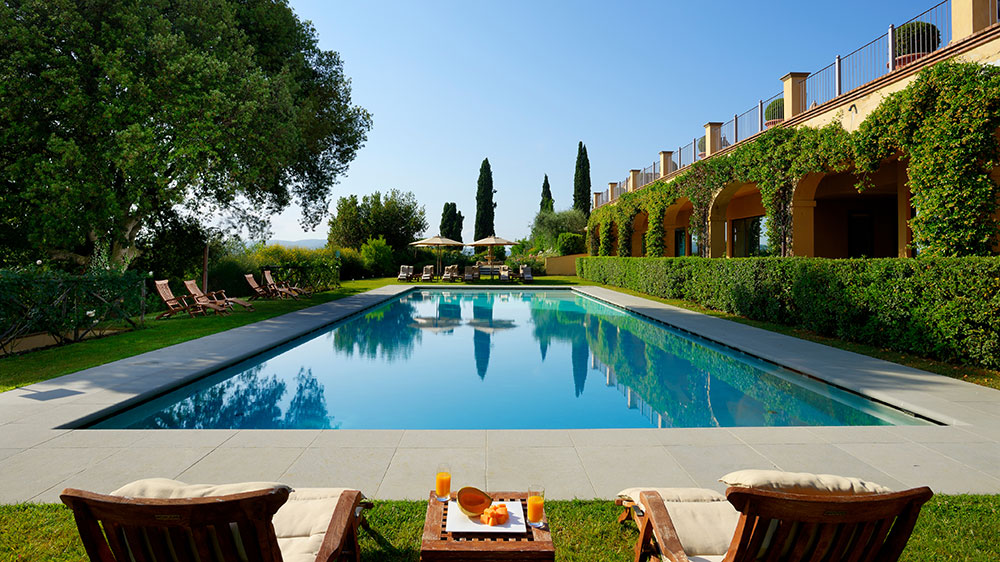 Courtesy of Como Hotels and Resorts

Castello del Nero used to be one of those properties best viewed from the outside. The towers of the 12th-century castle were commanding, and its setting on 740 acres overlooking the Chianti hills, quintessentially scenic Tuscan. But the interiors were another story altogether, dark and discordant, a collage of clashing prints.

Since COMO Hotels & Resorts took over the Tuscan property, though, and spent several months renovating, reopening in March of this year, all of that has changed. The overall décor, created by Milanese designer Paola Navone, is now serene, the furnishings contemporary with an overall subtle gray color scheme.  Details such as art in the 50 rooms are still to be filled in—and will be over the next months—but at least there’s a neutral, calm canvas to work with and one that allows the highlights of the castle—vaulted stone ceilings, frescoes in several of the rooms, the coats of arms of previous noble owners—to shine.

Now that it’s part of the COMO brand (which on its own is known for wellness-focused properties such as Parrot Cay in Turks and Caicos and the famed COMO Shambhala Estate in Bali), COMO Castello del Nero has upped its spa game with treatments ranging from rebalancing jet-lag recovery to rehydrating and reenergizing for men, plus individual fitness, yoga and Pilates instruction. Other facilities include an ice fountain, aromatic steam room, heated vitality pool and an 82-foot outdoor pool.

Since this is Tuscany, elevated culinary offerings are essential, and they’ve been upgraded under executive chef Giovanni Luca Di Pirro. He could remain solely in his fine dining restaurant, the Michelin-starred La Torre, which serves a mix of classic and innovative Italian specialties such as agnolotti filled with Chianina beef, pea cream soup, morels and herbs and blue lobster with amberjack tartare, coconut mousse and mango sourced from local farmers and the estate’s organic garden. Instead, he’s everywhere: conducting cooking classes, overseeing the more casual dishes in La Taverna set in the castle’s original 12th-century kitchen or the outdoor Pavilion by the pool. At lunch, opt for his robust tagliatelle pomodoro, which he serves sculpted like a budding rose. It’s simple, vivid and perfect for the surroundings…just like the rest of the hotel.