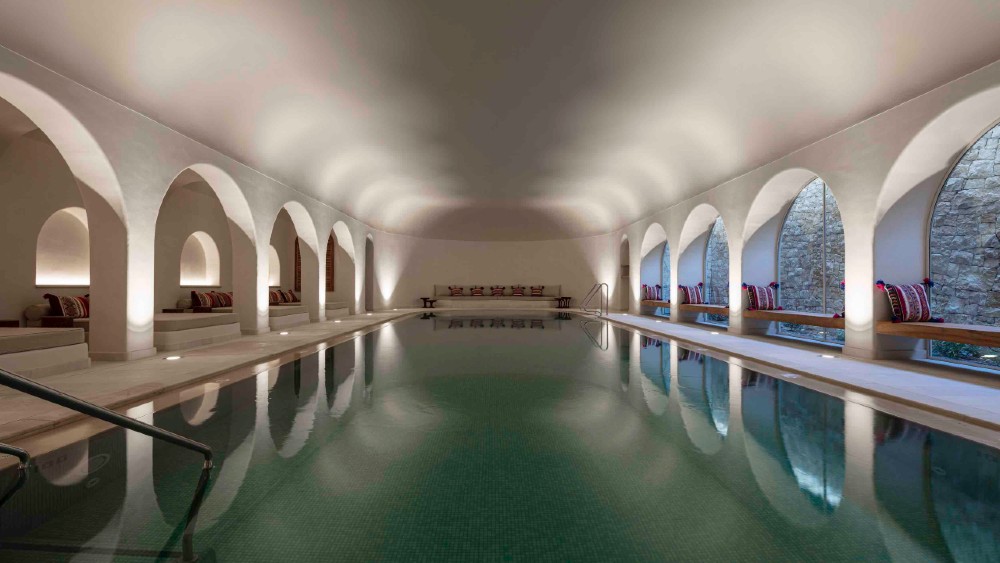 Stark, ethereal landscapes abound in Israel’s vast Negev Desert, but there’s something special about its southern region, in the Arava Valley. On a clear day you can look west toward Egypt’s Sinai Peninsula or spot the red mountains of Jordan to the east. Sunsets glow like the sky on fire, followed by a canopy of stars and the flicker of lights from distant kibbutzes and villages. It’s here, about an hour north of the Dead Sea resort town of Eilat, that you’ll find the new Six Senses Shaharut—assuming, of course, you can spot it.

“Our design is about creating a seamless flow with nature, so that you can barely see the man-made structures, even when you’re in the middle of the resort,” says general manager Manish Puri. Once atop the hill on which resort is built, “none of the brick and mortar blocks the 360-degree views, wherever you are.” As seen in these exclusive first look images, the design also offers a modern take on the structures of the semi-nomadic Nabataean community that once called the Negev home.

While the hospitality scene in the northern Israeli cities has been growing (and international brands Nobu and Soho House are set to arrive this year), one of the goals for Six Senses Shaharut was to create something the country didn’t have: a five-star desert resort to rival those you might find in Morocco or the Emirates. The 60 suites and pool villas on the 46-acre property have been crafted using natural stone, wood, copper and reclaimed teak, while Israeli artists, ceramists, weavers and more helped create interiors that evoke the area’s ancient Incense Route. Amenities include super-size mini-bars (with complimentary snacks), fireplaces, useful items such as walking sticks and yoga mats, and bath products custom made with local camel and goat milk, olive oil and desert flowers. The three-bedroom Private Reserve comes with its own pool, pizza oven and chef service.

The 60 suites and villas look out over the desert.  Courtesy Six Senses Shaharut

Accessible by helicopter from Jerusalem or Tel Aviv, or car from Eilat, the remote resort is dedicated to reflecting “all the stories the desert has to tell,” says Puri. On the culinary front, that means there’s a tale behind everything—of the artisans who make the Israeli tonics, beers, gins and wines, the cheesemakers and farmers from the partner kibbutz, the grower who’s able to cultivate tomatoes in the desert. The main restaurant will highlight modern Israeli fare and seasonal, organic products, while an interactive, nomad-style barbecue experience will take place around an open flame and taboon oven, overlooking the valley. At the library bar, the “shrine master” (aka DJ) will pull from the resort’s vinyl collection of music born of desert cultures from around the globe. (The collection will also be digitized and available to guests via a QR code.) More entertainment, such as local music and folklore performances, will take place at the on-site amphitheater.

Given the meditative setting, the wellness programming here is robust, including everything from signature treatments done with locally sourced ingredients to aerial yoga, hammam services, sleep programs and multi-day retreats. There are also plenty of ways to stay active, with guided treks, E-bike or mountain bike rides, astronomy sessions and visits to an organic kibbutz, or day trips to the Dead Sea, Red Sea or Petra, Jordan. (The kids’ programming is engaging and innovative, too.) As a nod to the nearby village of Shaharut, which was once famous for its camel market, the resort is also home to its own stable of 12 camels, which guests can visit, help feed or ride off into the endless Negev. Six Senses Shaharut is scheduled to open on June 1.