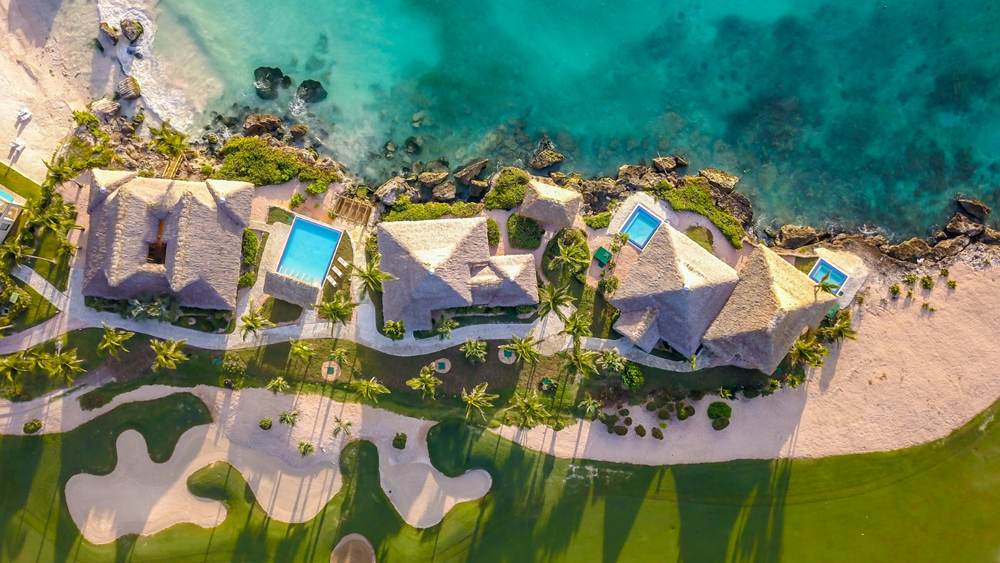 The Dominican Republic was one of the first islands to welcome vacationers back after last year’s hurricanes, as hotels like Amanera and the new Àni Villas were largely spared from major storm damage. But that hasn’t stopped the island’s jet-set favorites from getting in on the upgrade frenzy unfolding throughout the region—see Richard Branson’s Necker Island and the St. Regis Bahia Beach as proof. And with the debut of its four new ocean villas, Eden Roc Cap Cana is stepping up to the ultra-luxe plate.

The Relais & Chateaux property on the far East side of the island has cemented itself as one of the island’s most glamorous getaways since opening in 2012 thanks to its 60 poshly decorated rooms and suites, extensive spa, and fine Mediterranean-inspired restaurants. The new one- and two-bedroom accommodations are meant to round out its plush portfolio, offering an option that dials up the privacy—and down the over-the-top luxury—factor. Each sits directly on the resort’s private slice of sugary white beach, and, as a departure from the existing decorated rooms’ elegant aesthetic, feature a laid-back, toes-in-the-sand approach to luxury. Instead of the crisp whites and punchy jewel tones found throughout the property, the low-slung villas echo the beach outside: roofs are thatched, walls are paneled in light woods, and there is plenty of rattan to go around. All of the bedrooms feature sweeping vaulted ceilings—giving each a tropical, palapa-feel—and bathrooms are rustically styled, featuring open-air showers and tubs.

A beach-chic bedroom inside the new villas.  Photo: Alex Scarciglia

That pared-down vibe, though, is only skin deep. Each villa comes with a host of luxe amenities—ranging from private infinity pools overlooking the water and personal electric golf carts so guests can zip from the beach to the spa and back, to a dedicated private butler that can arrange for everything from a private jet should they want to spend the day island hopping to an afternoon out on one of the resorts slick yachts (that is, if they haven’t parked their own superyacht in the property’s 130-slip marina). Guests will also have full access to the surrounding Cap Cana community, allowing them to spend languid days at the Caleton Beach Club, or head out for activities like polo lessons at the state-of-the-art equestrian center and a round of golf on the 18-hole Jack Nicklaus Signature Golf Course.