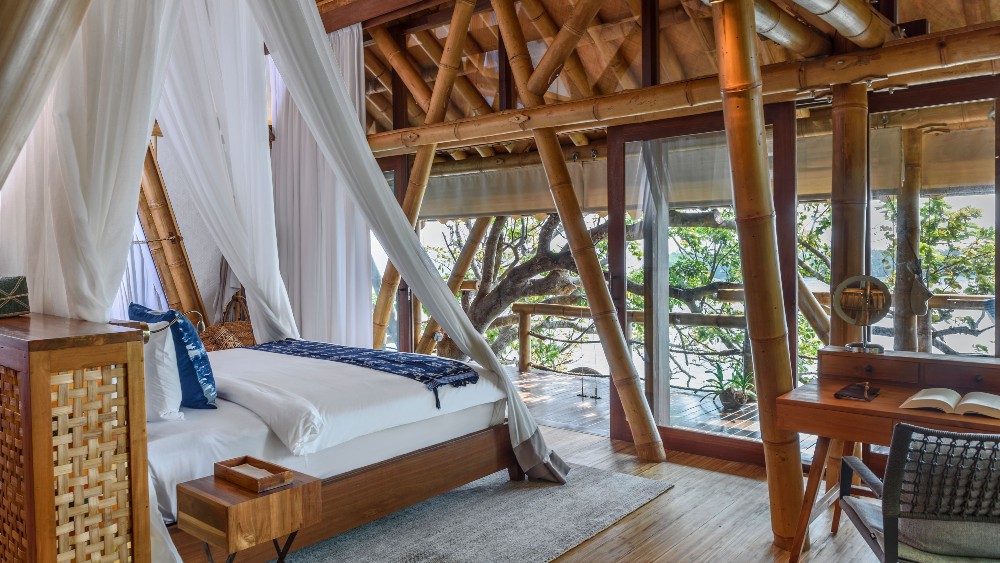 Bawah Reserve began with a bang—or several. Decades of dynamite fishing had damaged the reefs and marine life of Indonesia’s six-island-strong Anambas archipelago when UK-born businessman Tim Hartnoll first sailed into the lagoon in 2008. Having weighed anchor in Singapore, Bawah was the last stop on his route, but it turned out to be the beginning: nine years later, he rallied eight investors to transform the area into a marine conservation site and 35-bedroom hotel. This month, as Bawah unveiled a private island you can take over as your own, I flew to Singapore, sailed on a ferry to Batam, boarded a seaplane to Bawah and took a boat ride no longer than a deep breath to be one of Elang’s first guests.

Given that it’s named after the eagles that nest on the island, it’s fitting that I’m greeted by a welcome party from the wild: a baby blacktip reef shark, a prehistoric monitor lizard and a giant blue moon butterfly. Originally designed to be Hartnoll’s holiday home, Elang evolved from a pandemic project into six lodges, two restaurants and a spa. It’s no more than a 10-minute walk from one end to the other, but space and seclusion remain uncompromised: Suspended on bamboo stilts and crafted out of resak and rattan, each lodge is a tribute to Indonesian craftsmanship, while outdoor baths on the balconies and steps that lead you—and only you—to the sea underscore their sense of peace and privacy.

The buyout-only option is the first of its kind in Indonesia, and while visitors can still use all of Bawah’s fabulous facilities—from a tranquil canopy-level spa to cinema nights under the stars—I decide to make the most of my time at Elang: taking over the Club House speakers at sundown and dancing on the tables after dark; setting out for a castaway picnic to Coconut Beach and doing yoga at sunrise on Rock Island. It’s naughty, but nice: This isn’t a party island, but the slow pace and fluid schedule leaves plenty of room for fun.

An indecent number of massages (the “spa explorer,” a private alfresco treatment on a secluded sliver of Bawah accessible by boat, is unmissable) combined with endless time in the water leaves me feeling weightless—no mean feat the day after executive chef Michael Pataran’s zero-waste, seven-course menu. “We work with what the island gives us,” Pataran says, serving up chana masala hummus with black garbanzo chips followed by local kabayaki-style needlefish.

But at both Bawah and Elang, activities on, in and under water far exceed those on land. The intense, blistering blue of the sea makes it hard to look away, and every table, bed, sun-lounger and balcony bathtub is angled so that you don’t have to. A bloom of Chrysaora jellyfish passes through while I’m there, putting a pause on snorkeling for a day, so I commandeer an ingenious see-through stand-up paddle board instead. They pass beneath my feet, harmless and unharmed. On another morning, I dangle my legs over the edge of the west jetty to watch what looks like a screensaver of sergeant majors and blackspot snappers in the shallows beneath. A large triggerfish—affectionately named Susan by the staff—eyes me with curiosity, while the reef sharks ignore me entirely.

Back in my snorkel, I spot mushroom corals, Pixar-perfect clownfish, Moorish idols, bumphead parrotfish, bannerfish, blue stars and green turtles. The latter nest on Bawah’s beaches, where marine biologist and divemaster John Nolan and his team protect the eggs from poachers and predators. This year, they’ve overseen the journey of 1,337 baby turtles. “It never gets old,” he says, showing us footage of the palm-sized hatchlings scrambling from sand to surf. “They have a one-in-a-thousand chance of reaching maturity, so every sea turtle is an absolute miracle.”

Plastic pollution is one of the largest threats to these creatures and their ecosystems, and the only single-use plastic I come across in a week on Elang is a thumb-sized packet containing disposable pants in the spa. This year alone, the team has collected more than 3,400 pounds of ghost nets and microplastics, and they take their environmental impact seriously. The reserve is home to Indonesia’s largest floating solar farm, and plans are in motion to build the resort’s own bottling plant to serve the wider Anambas community.

On my last day, I head back to board the seaplane and sip a final pandan and passion fruit mocktail. A couple staying on Bawah mention that they voluntarily isolated for a fortnight before their trip, such was their determination to make it. I can’t help but wonder what lengths they’d go to if they knew about Elang.