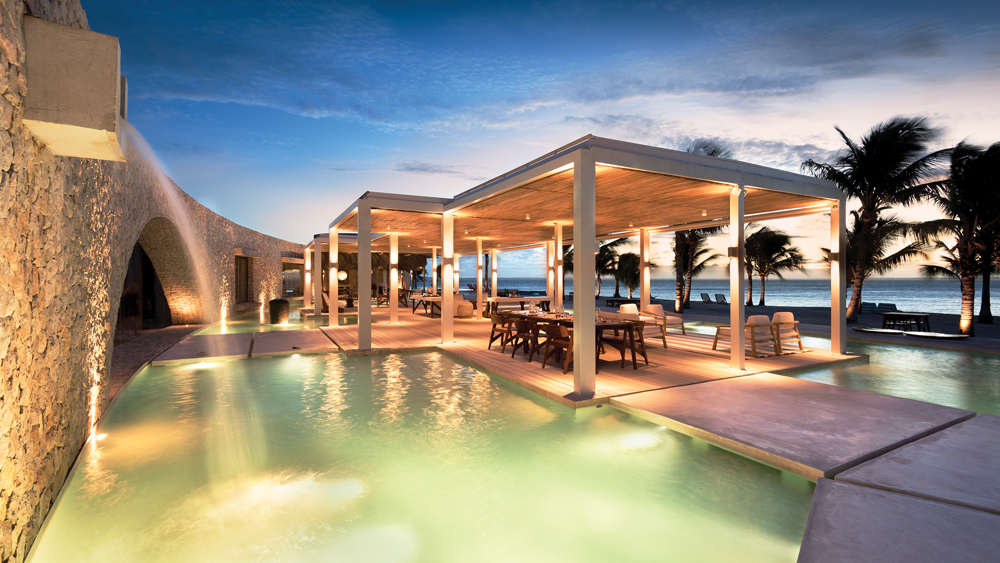 The whirring of blades thrummed methodically overhead as I stepped out of the helicopter and took my first step into the jungle of Madagascar. The rhythmic buzzing pounded on my eardrums and cut through the forest like a chain saw—hardly the unobtrusive arrival one would expect on a lemur safari, but a dramatic entrance no less. Both feet planted on the ground, surrounded by a menagerie of emerald, moss, and dozens of other shades of green I had never before seen, I instinctively crouched to watch the bellowing chopper swirl back into the sky, thrashing the canopy of ferns and palms around me in the process.

Left behind in the sudden silence of the forest, I turned my attention to the winding path just ahead, and hurriedly tiptoed after Simon Andrianiaina, the head guide at Madagascar’s recently opened Time + Tide Miavana resort. It was this way, past the tangled lianas and mass of shrubs, that Andrianiaina had just yesterday spotted a lemur. The shy, bug-eyed animals endemic to this island off the coast of southeast Africa can be found nowhere else on earth, a result of Madagascar’s separation from the supercontinent Gondwana 160 million years ago. And with no predators, the furry primates—comprising 33 species from the tiny pygmy mouse lemur to the large black-and-white indri—have flourished in these forests. Still, Andrianiaina warned me, they aren’t exactly easy to find.

“There’s a strong chance that we can see them today, but these creatures are cagey—and they’re fast,” he whispered, before disappearing into an uphill thicket of Canarium. I followed him closely, stepping gingerly over branches and leaves and mimicking his every move to navigate the dense forest. Then, a sound. Andrianiaina quickened his pace and again I trailed him, holding my breath in excitement. But alas, when we reached the source of the mysterious rustling, we found nothing but empty trees and swaying leaves.

Madagascar’s stunning landscapes are as mesmerizing as its population of rare species, including the golden-crowned sifaka  Photo: Courtesy Time + Tide

On any other safari, a failed sighting generally equates to dashed hopes. But in Madagascar, where the turquoise waves and golden sands are as mesmerizing as the rare encounters with ring-tailed lemurs and panther chameleons, that’s hardly the case. An unrivaled combination of wildlife, jungle, mountains, and beach, this island nation the size of Kenya is equal parts natural laboratory, adventure playground, and pure paradise. With the opening of Miavana—a private-island resort in the Nosy Ankao archipelago just off the mainland’s northeast coast—it’s now a luxury destination, too.

Miavana debuted last May with 14 villas spread over 2,500 acres ringed by 3 miles of private beach and a sparkling lagoon. Its low-slung accommodations are Robinson Crusoe meets Mies van der Rohe, stone and steel structures with floor-to-ceiling glass walls, breezy blue-and-white interiors, and sprawling terraces where the private plunge pools spill out onto the sand. There are three restaurants (including a beach pizzeria), a rooftop bar and wine cellar, and two Robinson R66 helicopters—painted turquoise with white stripes to match Miavana’s interiors. More than once, as I strolled from beach to pool to villa to bar, I lost myself, thinking perhaps I was in the Maldives or Seychelles rather than this naturalist’s utopia, home to some of the world’s rarest flora and fauna.

Beyond the creature comforts, however, is a true sense of Malagasy, from the resort’s Cabinet de Curiosities—a mini-museum featuring extraordinary island artifacts like a giant egg of the long-extinct elephant bird—to day trips to Manamphao, where guests can fish for bluefin trevally and observe nesting turtles and their hatchlings. Or, like me, they can try their luck on safari, exploring the Madagascan mainland and searching for its most elusive inhabitants.

Back on the winding mainland trail, Andrianiaina was suddenly excited. A quick solo excursion into the thicket beyond had revealed that indeed we were not alone in this verdant forest. “Can you climb up?” my guide breathlessly whispered, gesturing toward the steep hill from which he had just emerged. “Of course,” I mouthed. Up we zigged and zagged, hopping from rock to rock, and dodging wayward tree limbs until we reached the top. And then, there it was: a critically endangered golden-crowned sifaka, an alabaster-​hued beauty with a black face and marigold tuft of hair, and wide orange eyes that gave the fluffy tree-dweller a look of constant surprise. Lounging on a branch, his long tail twirling and curling as if it had a mind of its own, he stared down while I stared up. Our eyes locked and I froze, transfixed. Then, with a flick of his tail, he scampered off, leaving me behind, a motionless statue marveling at a sight that couldn’t be seen anywhere else on Earth. (Available through the Explorations Company).