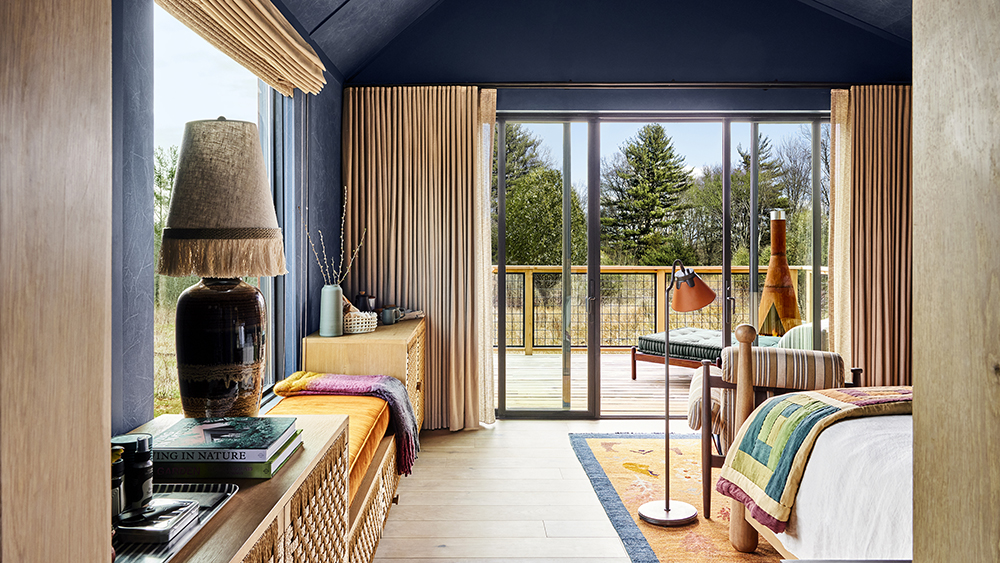 Can the Catskills finally claim some cachet? A host of new openings suggests that the quiet, sylvan areas north of Manhattan are on the upswing. Take the much-delayed 11-room Chatwal Lodge, which at long last debuted earlier this summer as an all-inclusive camp with a design that nods to the classic Adirondack estates of the Gilded Age. Room rates at the Sullivan County resort, starting at $1,200 per couple, include meals and outdoor activities—such as boating, canoeing and paddleboarding—around the 100-acre site.

This hotel will soon be joined by the first New York state location from Auberge Resorts Collection, Wildflower Farms, in nearby Ulster County (double rooms from $1,000). Its 140 acres are dotted with 65 freestanding cabins—the largest is 1,500 square feet—and is heavy on year-round countrified details (think both fireplaces and fire pits). The hotel incorporates a namesake farm, including an education center where guests can sign up for cooking classes and foraging expeditions, and offers an outdoor pool as well as a spa.

Meanwhile, longtime local hotelier Foster Supply, operator of several Catskills properties, has bolstered its five-star footprint by tacking on 10 bungalows to the venue at Kenoza Hall. A self-contained cluster of standalone rooms in a wildflower meadow, the accommodations are comfy and intended as a nod to the region’s turn-of-the-19th-century heyday (doubles from $899). Elsewhere, textile magnate Dan Silna and his wife, Joan, underwrote the refurbishment and reinvention of the sprawling, sportsman-aimed Eldred Preserve; the couple plowed over $35 million into the 1960s site (rooms from $435), including the newly built Bradstan Boutique Hotel, which provides a woodland hideaway within two hours’ drive of New York City.

And the surge of new high-end openings isn’t just taking place west of the Hudson River. Manhattan-based interior architect Rachael Stollar spent much of the pandemic living near Rhinebeck, on the river’s eastern banks, and soon cajoled her business partners, Erin Fearins and Ward Welch, into opening a new upscale interiors store there: House SFW is like a shoppable cottage packed with art, lighting and collectibles.

Chatwal Lodge, situated on the shores of the Lake Toronto Reservoir.  Allen Kennedy

A longer-standing resident is chef Clare de Boer; the Briton had split her time between Manhattan and Dutchess County for about five years before decamping to the country full-time to wait out the pandemic. She was intrigued to hear that the previous tenant would be vacating Stissing House, in Pine Plains, dating back to 1782 and one of the oldest taverns in America. On a whim—and on the same day she discovered she was pregnant—de Boer signed a long-term lease on the maze-like Dutch Colonial eatery. “You can feel the good times, the parties and the hangovers that have happened in these four walls,” she says. De Boer planned a simple, succinct menu with an emphasis on home cooking, including house-made salt-and-vinegar potato chips, and opened in March, barely five months after giving birth.

“It’s about luxuriously simple food and what everyone comes up here to do: relax,” she says. “I want this to feel like a home away from home—or the home you wish you had in the Hudson Valley.”