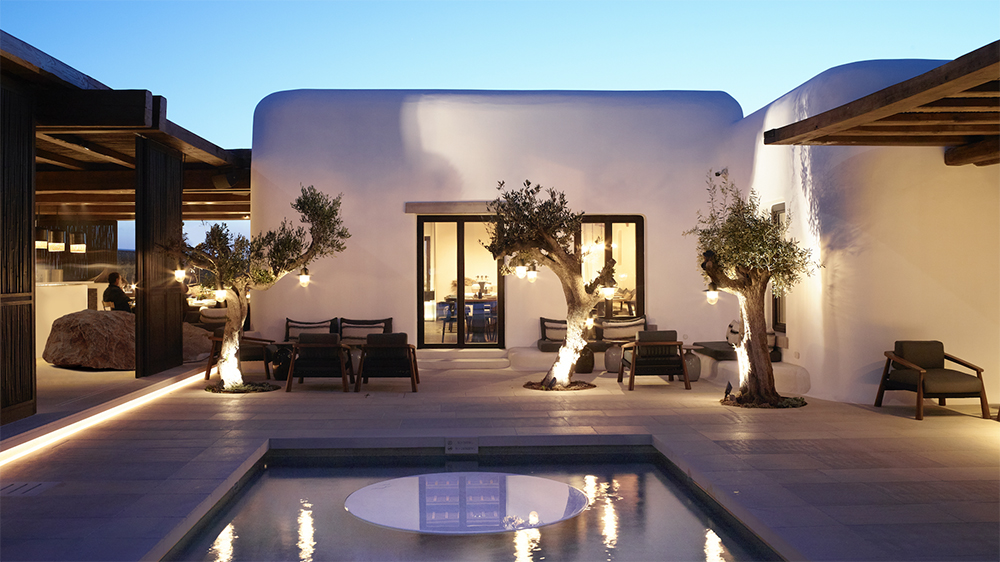 It’s mesmerizing to think that, just three-quarters of a century ago, visitors to Mykonos would have encountered a fairly similar island to that which its first settlers, tribal Ionians, encountered when they waded ashore 10 millennia previously: an arid, inhospitable, wind-beaten dot of land in the Cyclades with little to recommend it apart from the twinkling azure of the Aegean Sea kissing its shores.

Mykonos became a bohemian playground in the late-1950s, with a tony party scene developing around the whitewashed cubism in its main town and the sheltered, horseshoe-shaped alcoves on the south of the island. Then, in 1961, Jackie Kennedy—having become the world’s first ever influencer decades before anyone had heard of hashtags—visited with her sister Lee Radziwill. Grace Kelly, Brigitte Bardot and Sophia Loren followed, and Mykonos ‘went viral’ amongst those occupying that echelon of post-war society which tended to use the word ‘summer’ as a verb.

These days—Covid complications notwithstanding—Mykonos’s population of just over 10,000 are joined by over a million tourists each summer, drawn to the island by its enduring glam-factor, chichi shopping (both independent boutiques and big-name brands), architectural splendor, progressive values (there are an abundance of gay bars and nudist beaches) and a concentration of luxury hotels which leaves prospective visitors with an agonizing choice to make.

The latest jewel in the island’s hospitality crown is Kalesma, a cluster of 25 suites and two villas which descend, like tiered giant marshmallows, down a slope to Ornos Bay in the island’s southwest. Designed by Greek architectural practice K-Studio (who are also behind the island’s airport), in collaboration with interiors mavens Studio Bonarchi and the co-owner, Thessaloniki-born restaurateur Aby Saltiel, Kalesma evokes the spirit and congeniality of a traditional Cycladic neighborhood. This is a nod not just to the island’s native way of life, but also to Mykonos’s aforementioned status as a centre of gravity for post-war boho hipsters: these early tourists would stay with locals and immerse themselves in local family culture.

In keeping with the village-feel design ethos, all communal areas are adjoined, from the walled firepit so beloved by pre-prandial cocktail sippers to the Aloni Sunset Lounge and the Pere Ubu restaurant. a spacious bar area (effectively the resort’s ‘plateia’, or town square), which is flanked by an elongated infinity pool overlooking Ornos Bay. The result is a companionable atmosphere which somehow maintains Kalesma’s signature jasmine-like aroma, which emanates from the 26,000 local plant species on the property. From the bougainvillea creeping through openwork lattice dividers, inspired by the island’s many pigeon houses, to lemon and olive trees brought from all over Greece; basil, mint and local herbs used by the kitchen also add their own scents to the olfactory chorus.

This community spirit is bolstered by the absence of any kind of inter-guest pecking order. Unless you’re in either the three-bedroom Apollon Villa or the four-bedroom Artemis Villa, all suites are identical in size (678 square feet with 969 square-foot terraces) and share a geometric layout with traditional Mykonos homes. They all have plunge pools plus al fresco showers and, because the resort rests on the spine of the Aleomandra Peninsula, views of both sunset and sunrise (the king-size beds are angled in such a way to maximize your enjoyment of the latter). Spa treatments (which are on offer alongside private yoga and Pilates, plus personal training sessions) can take place in-room, although a dedicated spa is currently being built. A private chef and butler are also available to villa guests on request.

Décor wise, whitewashed walls juxtapose elegantly with dark tiles, timber beams and bamboo ceilings, a muted overall color palate interrupted here and there by cautiously outré marble and lava stone tables, as well as statement Rick Owens furniture and quirky artworks (including strangely fetching circular wall sculptures of charred wood). Expect, too, ceramics by Serbian artist Aleksander Vac, and tastefully quirky equine touches here and there, such as wall lights made of bridles and switched on using pull-handles made of horse hair—a nod to the sacred structures on Deli where Apollo, as local myth would have it, stabled his horses.

Taking in the sunrise from your forged cement bathtub should really become a daily ritual, but even the most habitual early risers may instead be seduced, throughout their stay, by a nightlife scene that’s just 10 minutes’ drive away. Kalesma staff—an unobtrusively obliging set of consummate professionals—are always willing to whisk guests along the single-road, two-and-a-half-mile stretch to Mykonos Town. A bar-hop along Little Venice, the waterfront quarter, is recommended, with BAO offering the least obstructed view across the sea and Galleraki offering the most shelter from that notorious wind.

For day-trippers, the famous row of windmills—built by Venetian settlers in the 16th century and used to mill wheat until tourism colonized the island’s economy in the middle of the 20th century – are an enjoyable pre-dinner excursion, while those who see perusing classical antiquity as an imperative part of a visit to the Hellenic Republic can take the 40-minute boat ride to Delos, a sacred island, held to be Apollo’s birthplace, where some of the ancient stone hut ruins date back to the 3rd millennium BC. The concierge, meanwhile, is a font of knowledge when it comes to lesser-known eateries and boutiques, which of the island’s 800 or so tiny churches are worth a visit and which stretch of coast is best suited to any given day’s weather. His ever-diligent reception colleague can also organize private yacht charters and helicopter transfers upon request.

However you choose to spend time off-resort, you’ll want to get back to Kalesma for dinner—a culinary experience that eschews the fusion fad in favor of local fare that’s as authentic as it is delectable. Guests are enthralled from the moment the waiters bring out the entrees; think local horiatiko psomi breads made on site in a brick oven with accruements such as smoked, spicy feta, home-made taramasalata, tzatziki and melitzanosalata, plus sardines wrapped in vine leaves. The roast octopus with spicy house-made sausage, black garlic, onion-vinegar syrup and black hummous will have foodie visitors imploring Chef De Cuisine Zacharias Kopridis for the recipe.

A fire pit and outdoor seating on the property.  Courtesy of Kalesma

As with Venice, arriving by boat at this wonderfully convivial, pulse-slowing resort works wonders for that all-important first impression. Take that option—and there are yacht-mooring opportunities in the bay—and Kalesma’s name, which translates as ‘inviting’, will resonate from your very first glimpse of it. Black Tomato can arrange four nights in a Kalesma suite from about $3,650 per person including flights, private transfers and breakfast.

Check out more pictures of Kalesma below.