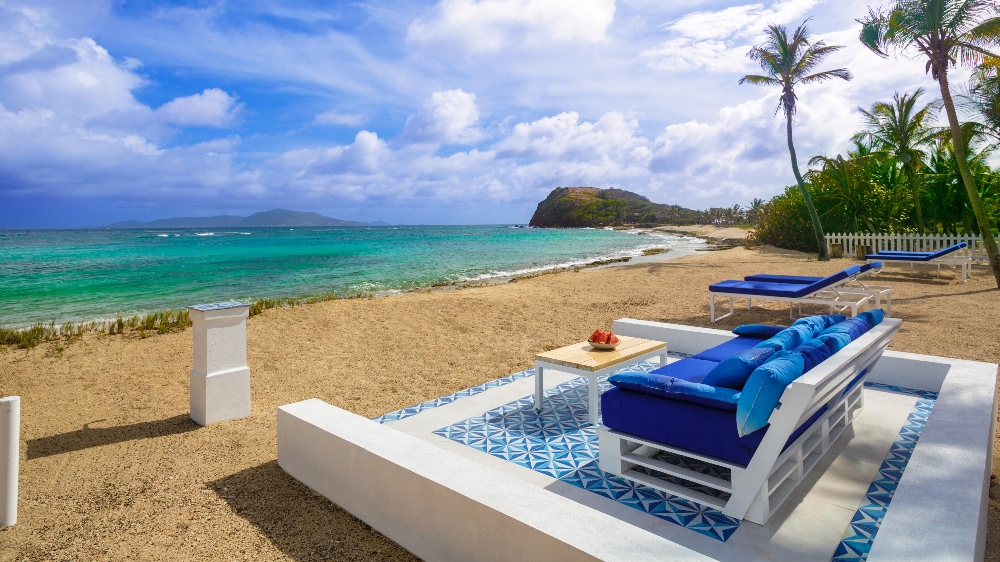 In 1966, Americans John and Mary Caldwell touched down on Prune Island in Saint Vincent and the Grenadines. The couple was immediately drawn to the pristine slice of paradise and its like-minded, free-spirited travelers. After scoring the real estate deal of a lifetime—leasing the tropical idyll from the government for a mere dollar a year—the Caldwells transformed the lush, 135-acre expanse into the 10-room Palm Island Beach Club. In 1999, the property changed hands and was reborn as the luxurious Palm Island Resort.

Some 23 years later, I arrived in Prune Island (now referred to as Palm Island) to find the same sense of seclusion and freedom the Caldwells had fallen in love with half a century ago. I was staying in the resort’s new 4,000-square-foot, two-bedroom Seahorse Villa that was introduced in August, and things were considerably more sumptuous than I expected. The island was once a refuge for hippies from the US and Europe, after all.

Designed for long-term stays, Seahorse Villa is an oceanic home away from home. Set on a private stretch of beach, it offers endless views without anyone around to interrupt them. The interior is awash in shades of azure and ivory that mirror the soothing blues and whites of the sea and sand. Most of the furniture was handmade in nearby Saint Vincent and creates a charming, coastal feel.

An eclectic playlist of lively tunes reverberated from the Bluetooth speakers throughout the villa and set the soundtrack for my next few languid days. In the morning, I sipped my coffee on a cloud-like loveseat and watched pelicans dive into the ocean to catch their prey. I then drifted to the cabanas where I’d linger long past sunset thanks to the wooden lights. My favorite spot was the floating hammock where I spent afternoons swaying in the breeze with a rum punch in hand.

While it’s hard to extricate yourself from this kind of solitude and serenity, I made an effort to explore the far reaches of the 45-room resort in my own golf cart. I noticed that the verdant lawns often transform into a cricket pitch or a soccer field at a moment’s notice if guests are in the mood for a spontaneous game with the staff. I was in pursuit of something more relaxing, though, so I treated myself to a 2.5-hour hibiscus treatment at the spa. The indulgent journey began in a soaking tub with ocean views then progressed to a scrub, a massage and a facial with lavender-infused essential oils. Suffice to say, it had quite a restorative effect.

One morning I took to the walking trail next to the villa to take in the sunrise. Another day, I biked to one of the island’s five beaches and passed more iguanas than people. Here, I tucked into an oceanside picnic of croissants, cajun chicken and rosé as I watched baby sharks swim nearby.

The meals at the Royal Palm Island and Sunset Grill restaurants quickly become a highlight of the stay, from decadent breakfast spreads of cinnamon French toast soaked in Vincentian rum to grilled steak and swordfish served with vegetables grown in the island’s greenhouses. If you’re not in the mood to travel back and forth to the restaurants, the resort can arrange a private chef to cook for you and stock the villa’s refrigerator with all your favorites.

On one of my strolls across Palm Island, I met Andre Patterson, an affable gentleman originally from Saint Vincent who now works as a server at one of the restaurants. I told him how there was something unique about the sense of calm that surrounded the island, and he told me I was far from alone in feeling that way. “We have guests that come here often,” Patterson said. “They come because they feel at peace.”

No matter how much Palm Island has evolved since the Caldwells first arrived, the serenity is something that has never changed.

Rates for the Seahorse Villa start at $3,000 per night.

Click here to see the Seahorse Villa at Palm Island in photos.