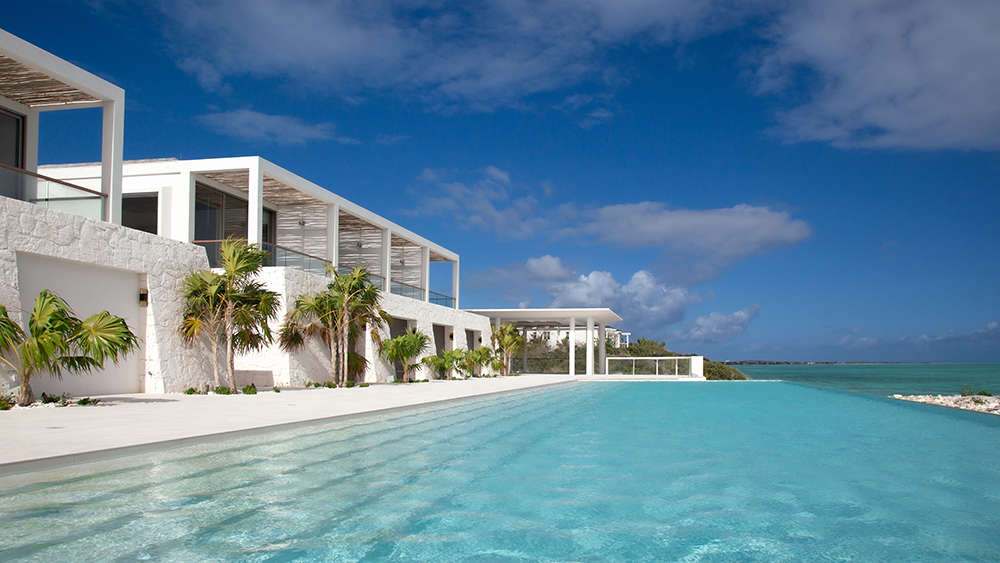 Consider it the Caribbean Capri. Overlooking the ocean from the edge of a 100-foot-long infinity pool at Rock House, the new residential villa resort carved into a low limestone cliff on the North Shore of Providenciales in the Turks & Caicos Islands, one could nearly mistake the view for somewhere rather more Italian; only the lovelier turquoise water gives away the trick.

None of the illusion is by chance. Far from the rum punches and beach-chair panoramas of the typical TCI getaway, Rock House wears its Mediterranean inspiration on its sleeve, from its clean white stone lines to the free-flowing house rosé to the light, Adriatic-inflected cuisine (standouts include a refreshing gazpacho, served like a Bloody Mary in a spice-rimmed glass, and a daily seafood crudo, including a creamy scallop perfectly dressed with aged olive oil, lemon juice, Maldon sea salt and lime zest). Another amenity familiar to Cannes and Santorini regulars: high-touch service. Guests are picked up by SUV at arrival—commercial or private—and whisked 10 minutes away to the resort, straight to the awaiting accommodation, with final check-in to be conducted at leisure.

“I have almost all your information before you arrive, so why would I make you fill out paperwork if what you really want to do is take a shower?” asks assistant hotel manager Batu Erem. Many requests here, from housekeeping to dinner reservations, take place via app, but the hyper-personalized service within this intimate 46-key resort—an assortment of studio and one- and two-bedroom villas, many of which can be combined into multiunit accommodations—is a calling card in the TCI: Erem and fellow assistant hotel manager Daniel Hoffman arrange to greet guests on arrival, to understand dietary restrictions and preferences, transportation needs and special requests.

And while the island standbys of dive boats and cracked conch are always a chauffeured ride away, the aim of Rock House, opening next month as the newest property from Providenciales development powerhouse Grace Bay Resorts, is to keep the party local. “The Sunset Bar and infinity pool at night are going to be a fashion show,” says managing director Crawford Sherman. “While there’s plenty of privacy if that’s what you want, this is also a place for the traveler who likes to see and be seen.”

But despite its off-the-beaten-path location and Med vibes, Rock House COO and principal Nikheel Advani is quick to point out that, rather than trying to stand aloof, the new property is additive to the TCIs experience, and the Grace Bay portfolio specifically. “From day one we’ve always called ourselves a Caribbean company, and that’s not going to change,” he says. “But how do we layer it with a little more difference?” Advani ascribes Rock House “a sophistication you don’t usually see in the Caribbean,” while insisting that the friendly, laid-back local sensibility “can never leave—that’s who we are. So it’s about finding a balance between those two points.”

The idea for Rock House—named after the countless slabs of excavated limestone hand-carved and painstakingly jigsawed together across the property by local artisans—came from CEO and principal Mark Durliat’s wife, Melissa, a media consultant and television producer who has created numerous programs from the craggy outcropping of Cannes. Providenciales’s hospitality-barren North Shore, she insisted, could offer an entirely new version of the TCI experience—though one familiar to a certain jet-set demographic. “It became a passion project,” says Mark, who secured the 14-acre property, soon to include larger residential-style housing and expanded wellness facilities, in 2016. “There’s a special feeling you get in Cannes, or the Amalfi Coast,” he says. “With Rock House, which is just over a three-hour flight from New York, we figure we can save you a transcontinental trip.”