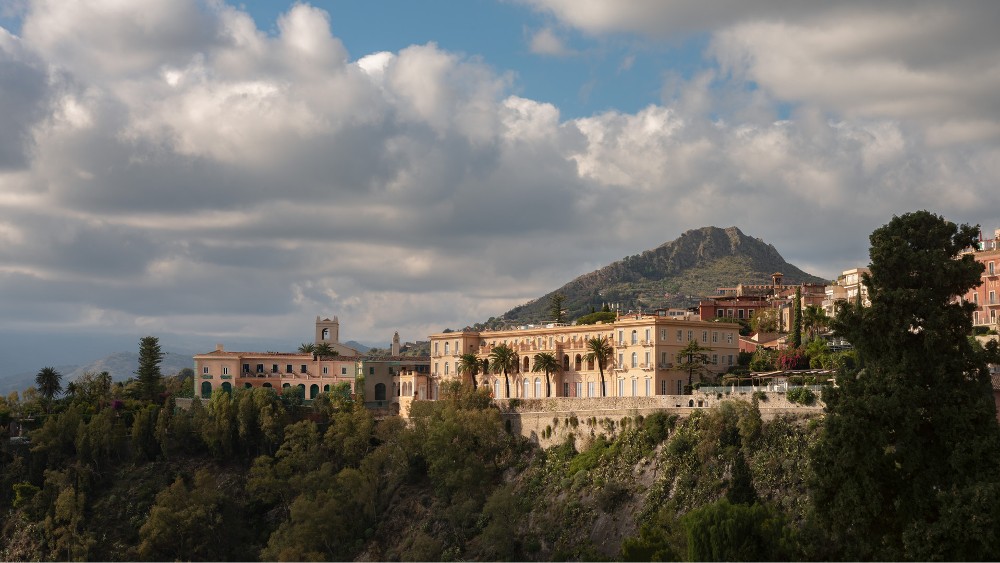 For more than 600 years, one of Sicily’s most storied addresses has been adding layers to its identity. Once a wealthy monastery and later a jet-set-era hotel that counted Audrey Hepburn and Oscar Wilde among its glamorous guests, Taormina’s San Domenico Palace has long been a destination for luxury and culture. But this latest era, with its revival last year as a Four Seasons Hotel perched above the glittering Ionian Sea and below the fiery Mount Etna volcano, might be the most exciting. This weekend, viewers tuning into the premiere of the second season of HBO’s The White Lotus saw the Emmy Award-winning upstairs-downstairs dramedy set its sights on the Mediterranean’s largest island—and after transporting viewers to a fictional five-star hotel in Hawaii (filmed at the Four Seasons Resort Maui at Wailea) in its first season, San Domenico Palace now serves as the beguiling backdrop.

It’s easy to see why the luxurious 111-room hotel was chosen. Its rooms and suites are spread across two wings: one dating back to the 14th century (some of the monk’s cells have been converted into expanded guest rooms) and one added in 1896 before the convent was converted into one of Europe’s first grand hotels. The new interiors, designed by Naples-based architect Valentina Pisani, blend history with modernity: Marble surfaces, smoked mirrors and bronze details complement a neutral palette that doesn’t compete with the property’s spectacular views. Many of the rooms face the sea and some, like the sprawling 1,500-square-foot Royal Suite, offer terraces with plunge pools overlooking Taormina’s Ancient Greek theater chiseled out of rock.

Walking through the property’s quiet cloisters and salons is like browsing an art gallery. Several sculptures, paintings and stoneworks from the Dominican Order’s collection were salvaged during the restoration—some pieces have never seen the light of day before now—while contemporary installations with classical nods offer a fresh perspective.

“This hotel could be a museum, because every piece is authentic,” says Margaret Raneri, the hotel’s art concierge, as she points out a painting by one of Caravaggio’s students. “For the very first time, we can really enjoy the collection.”

It’s a fitting addition to a part of Sicily long synonymous with artsy visitors—Taormina, just an hour’s drive from the Catania airport, has a reputation as a southern escape for artistic inspiration and wild parties. In the main square, you’ll still find the very haunts once frequented by writers Truman Capote and DH Lawrence and celebrities like Greta Garbo, Elizabeth Taylor and Sophia Loren. When the bustling boutique-lined streets became too much, San Domenico Palace served as a tranquil respite. Its Italian and Sicilian gardens still frame a view of Mount Etna, while a new 69-foot infinity pool offers a private alternative to the popular Isola Bella Beach. By evening, the terrace of fine dining restaurant Principe Cerami is always full, with lauded Etna-born chef Massimo Mantarro serving Sicilian specialties like homemade spaghetti with cuttlefish ink and vegetarian arancini. (Guests looking for a deeper dive into Sicily’s culinary traditions can join Mantarro on a private tour of Mount Etna’s cheese and wine producers.)

In the evening, the hotel’s Ancient Cloister, landscaped with plants that release a sweet fragrance at night, becomes a midnight oasis. Archaeologists from the nearby University of Messina are still researching the treasures unearthed within these walls: In the Grand Cloister, which now serves as an open-air courtyard beyond the reception, they discovered a Roman cistern believed to have been used as a mikveh by the Jewish community that settled in the area in the fifth century. When the hotel reopens for the season next March, it will unveil a new spa that draws inspiration from the diverse cultures—Roman, Byzantine, Arab and Norman, to name a few—that made Sicily one of the world’s original melting pots.

“Taormina is like a tiramisu,” says Raneri while tracing her finger over an inscription on one of the old stone columns. “Layer by layer, we’re touching on the history of the ancient world.”

Rates at San Domenico Palace, Taormina, start at $800 per night.