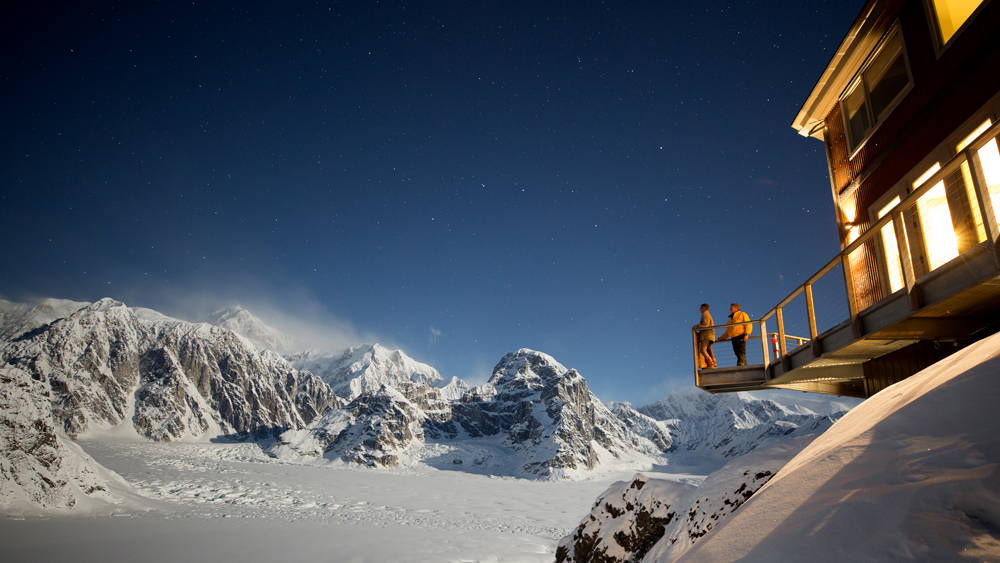 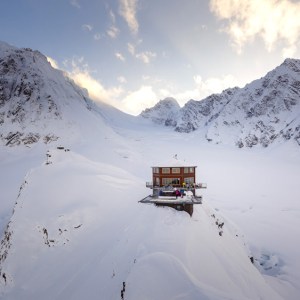 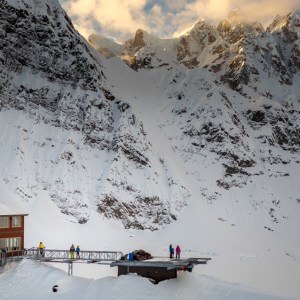 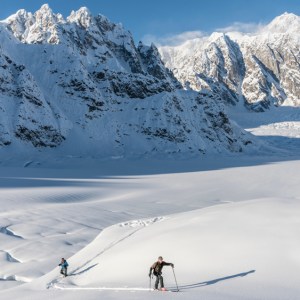 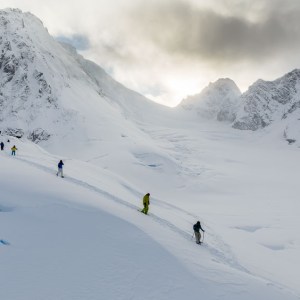 You arrive at the newly opened Sheldon Chalet, a luxury mountain retreat nestled deep inside Denali National Park, after a thrilling, IMAX-like helicopter ride that wends through the rugged Alaska Range to the Sheldon Amphitheater, a 35-square-mile glacier valley in the shadow of North America’s tallest mountain. Talk about making an entrance: Guests are greeted with Alaskan seafood hors d’oeuvres and a glass of much-needed Champagne after experiencing such dizzying heights and vast colossal landscapes. “They have a hard time reconciling the grandeur they’ve just experienced,” says Marne Sheldon, who operates the chalet with her husband, Robert. “They’re in awe.”

Perched at 6,000 feet on a snow-laden, granite outcropping that presides over a sprawling glacier, the modern, five-bedroom chalet is just a stone’s throw away from the property’s original rustic backcountry refuge built by Robert’s father, Don, whose pioneering work in Alaska as a pilot and land surveyor resulted in the state naming a natural amphitheater in his honor. In the 1950s under the Homestead Act, the Sheldon Family was granted the 5 acres of private land that encompasses the outcropping, called a nunatak, a unique distinction that was grandfathered when the national park was later established. A few years ago, this generation of Sheldons began construction of the new chalet, airlifting in every window and wood plank. Today, the only other way one can sleep so close to Mt. Denali is in a tent with an ice axe.

At home in the comfort of Sheldon Chalet, however, guests—of which there are only a maximum of 10 at any given time—are treated to Denali’s magnificence with none of the privations intrepid mountaineers must endure. They can cozy up with a faux-fur throw in the communal living room, or warm up on the rooftop sauna. In the dining room, they can feast on barbecued Alaskan oysters, prepared by a former celebrity chef, and served on a handcrafted birch-wood table.

Comforts aside, however, the main attraction lies on the other side of Sheldon Chalet’s panoramic floor-to-ceiling windows: the occasional blizzard and rumbling avalanche, streaks of pastel rays at sunrise, and, in late afternoon, the ethereal neon of alpenglow cast across a cathedral of jagged peaks. For much of the year, aurora borealis ignites the night sky. Depending on the season—not to mention, of course, the elements—guests can also embark on guided expeditions like fishing, heli-skiing (with neighboring outfitter Tordrillo Mountain Lodge), and an adventurous trek across the Ruth Glacier.