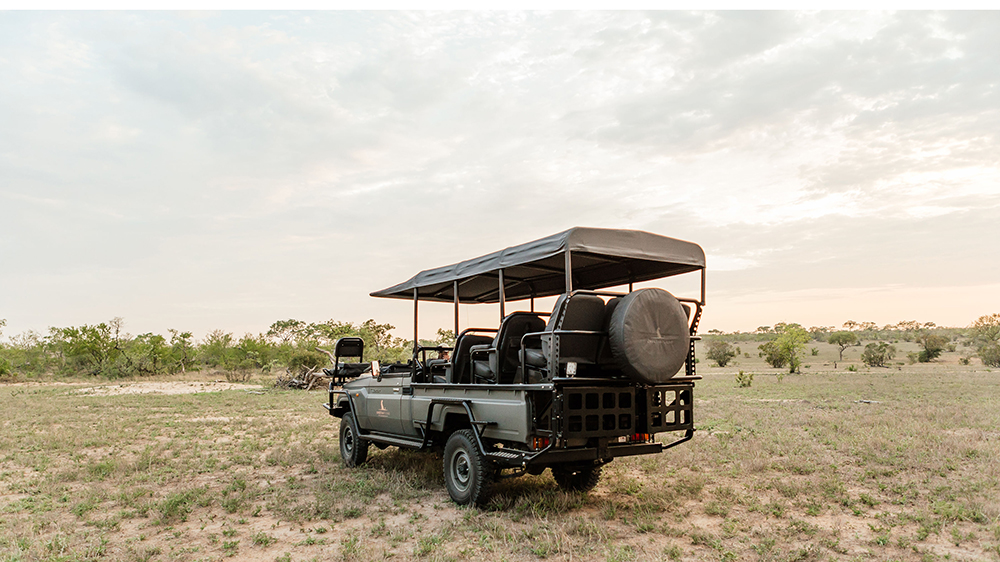 Diesel fumes and the growl of a hardworking engine are usually part of the stop-start process of tracking animals on the twice-daily game drives that are central to any high-end safari experience in Africa. It’s not unusual to spend six to eight hours a day in an open 4×4 vehicle traversing rough terrain. Now, the entrepreneurial owner of Cheetah Plains, a new turbo-luxe lodge in South Africa, has introduced a game-changing electric vehicle designed to enhance the experience while being kind to the environment.

Zero emissions were the initial incentive behind the design of the new safari trucks, which cost about $100,000 each. (That’s double the price of a regular safari vehicle.) But the byproduct of the environmentally friendly fleet of Toyota Land Cruisers— which are fitted with the latest Tesla battery technology and, fully charged, can drive for hours over any terrain—is a nearly silent safari, meaning closer encounters to lions, leopards, giraffes, elephants, and the rest of the native wildlife in the 160,618-acre Sabi Sand Game Reserve. For wildlife photographers, in particular, the real advantage is the low hum of the engine and the unobtrusiveness of gliding quietly through the bush.

Cheetah Plains is the latest property to launch in the Sabi Sand, a private game reserve made up of mainly family-owned concessions. At around $8,500 per acre, the Sabi Sand is the most expensive land under conservation in South Africa. Along with all of its native predators, sightings of its famous leopards are the reason why safari-goers pay top dollar to vacation at its swanky lodges.

In line with its boundary-pushing approach to game viewing, Cheetah Plains offers just three private villas, each designed with cutting-edge sustainability credentials by Cape Town–based architect Stefan Antoni, who is better known for designing futuristic luxury hotels in places like Thailand and the Seychelles than safari lodges in Africa. The houses have the latest in gray-water recycling systems and, by April, will operate 100 percent on solar power.

While out on silent safaris, guests can borrow from the lodge’s stash of Nikon D850 cameras and binoculars—though the latter will hardly be necessary given the close-up viewing opportunities the new Land Cruisers provide. Back at camp, they can take advantage of luxuries like complimentary spa treatments, a temperature-controlled wine cellar, a solar-heated lap pool, and a media lounge. Indeed, the future of safaris is here…and it lives at Cheetah Plains.