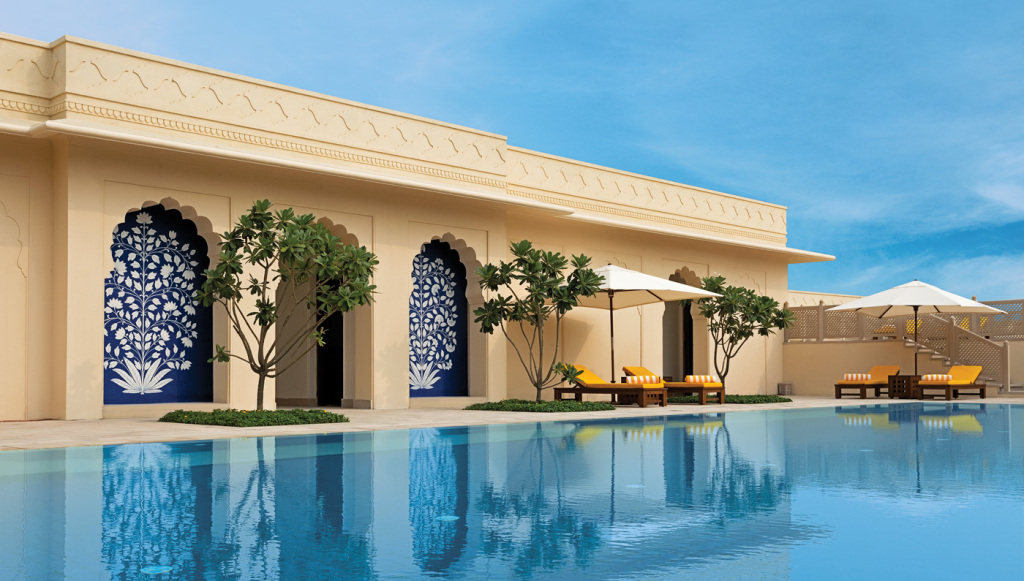 It’s been just over a year since India’s famously elegant Oberoi Group debuted their first wellness destination property, The Oberoi Sukhvilas Resort & Spa, in the forested outskirts of the North Indian city of Chandigarh. And while the resort was an instant hit, the reveal of the 12,000-square-foot spa came a tad bit later, launching its comprehensive menu of physician-led Ayurvedic wellness programs along with Chinese- and European-style treatments and facilities just this winter.

The spa’s design is quintessentially Indian, with symmetrical reflecting fountains and courtyards done in the traditional char bagh style favored by the Mughals. The grounds also feature an east-facing yoga platform on one end designed for yoga sessions practiced in the soft light of the morning sun. Breaking from this Indian tradition, however, is the Roman-inspired bath complex—which is one of the property’s most attractive features. The airy space is outfitted with twin men’s and women’s bath circuits, each with its own infrared sauna, aromatherapy steam room, and warm marble tepidarium.

The ancient art of Ayurveda certainly takes center stage at Sukhvilas, and the destination spa offers customized programs lasting up to three weeks designed to help guests detox, lose weight, or simply unplug from the overstimulation of digitally dominated life all under the care of the resort’s resident Ayurvedic doctor. Treatments here range from the signature dinacharya—which involves a variety of traditional cleanses like medicated eardrops and inhaling herbal smoke—to meditation sessions guided by the sounds of live sitar recitals. Diet also plays an integral role in the Ayurvedic process, so guests should be prepared to forgo the milky masala chai and rich chicken curries for which North India is famous. Instead, they will adhere to meal plans full of lighter, but nonetheless flavorful, plant-based dishes and fragrant cumin teas specifically designed to suit their specific body type and health needs.

Guests who aren’t following a strictly Ayurvedic program can opt for everything from classic aromatherapy oil massages and quirky Himalayan singing bowl massages to scrub-downs in the resort’s hammam. Staff have also received extensive training on modalities like foot reflexology and meridian acupressure massage from a consulting doctor who flew in from China, ensuring that the treatments are as traditional and authentic as possible—leaving guests rejuvenated and transformed from the inside out.