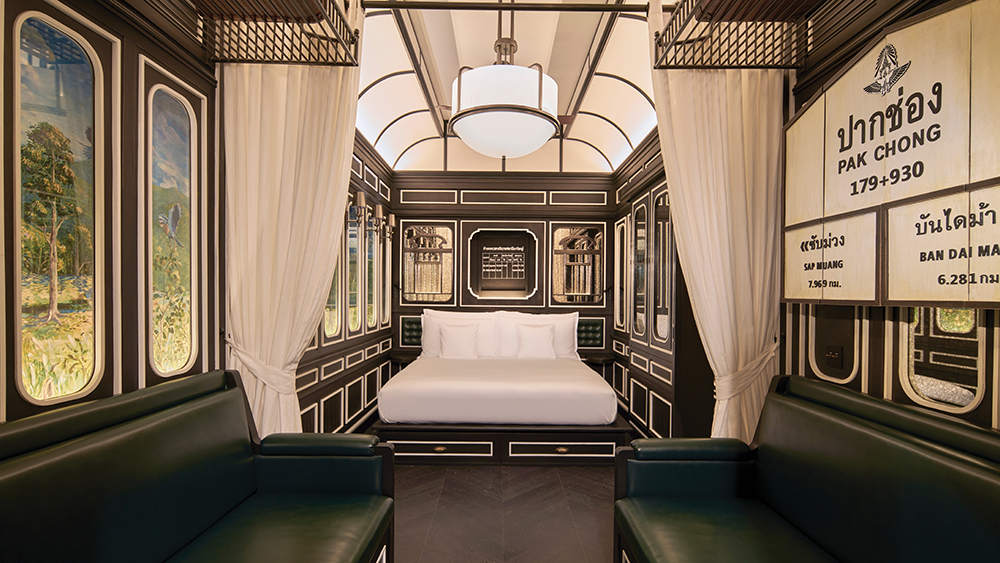 The inspiration for the new InterContinental Khao Yai stretches all the way back to the 1800s, when Thailand’s King Rama V was among the first Asian monarchs to visit many of Europe’s key capitals, including Paris, Vienna and London. Much of it conducted by rail, his grand tour was a revelation for the king—and consequential for his homeland, encouraging him to support the introduction of train travel to Thailand.

The story of Rama V’s trailblazing European odyssey always resonated with architect and designer Bill Bensley, who once spent summers “taking groups of old ladies on a train from Vancouver Island all the way to Quebec,” which even today he describes as “a great job.” And when he was asked to conceptualize a new resort nestled in rural Khao Yai, his research showed the area was in close proximity to old railroad tracks that once linked northeast Thailand to the rest of Southeast Asia.

Those various influences were channeled into the creation of Somsak, the fictional stationmaster of Khao Yai Station (also invented) whose imagined aesthetic inspired the whimsical property. On arrival, guests check in at Somsak’s ticket office, complete with his “personal” keepsakes in the form of antiques and heirlooms, placed throughout the property, meant to hint at the stationmaster’s backstory.

The theme continues in the radiant cobalt blue of Somying’s Kitchen, decorated with vintage-looking train posters. Named for Somsak’s mother, the casual restaurant has the feel of an American diner crossed with a provincial railway station and serves an all-day menu of Thai and international cuisine. Likewise, within the hotel’s 45 standard “rail rooms” (from $190 per night) you’ll find old travel guides displayed by the bed, televisions hidden behind station signboards and murals of pastoral scenes framed under glass panels, as if being viewed through a train window.

But it’s the resort’s suites and villas that are emerging as among the most distinctive accommodations in Thailand. They began to take shape when Bensley noticed a Bangkok train yard full of rusting old train carriages, one entangled by ficus trees just like the ruins of Angkor Wat. “I thought, ‘How cool would it be to upcycle them?’ ” he recalls. Securing sufficient units proved not only unexpectedly difficult but also excessively expensive. “There are many people that like to collect these things,” Bensley says of the heritage railcars. “To get the few we did was like pulling teeth.” But the effort paid off, with 19 carriages now elegantly reconfigured as unique, strikingly stylish accommodations (starting from about $320 per night).

At just over eight feet wide, the carriages are narrow but long, stretching up to a luxuriant 66 feet, colorfully finished and offering generous outdoor space, including a bath and large deck; five units also include a private swimming pool. Bensley promises that the Heritage Railcar, making up two full-size cars running together, will “be the strangest-proportioned suite anywhere in the world.”

Strange, yes, but in the way that engenders enchantment, not confusion. Whether you’re booking a treatment at the Back on Track spa, dressing up for drinks at the bar at Papillon or dinner at the French-style Poirot Brasserie or watching black swans glide by while enjoying scones and mango macarons at the Tea Carriage, Bensley’s creation is full of fun and playful imagination. Wonderment isn’t a feeling one expects from a modern luxury resort, but once experienced it’s easy to wonder why we can’t have more of it in the world.