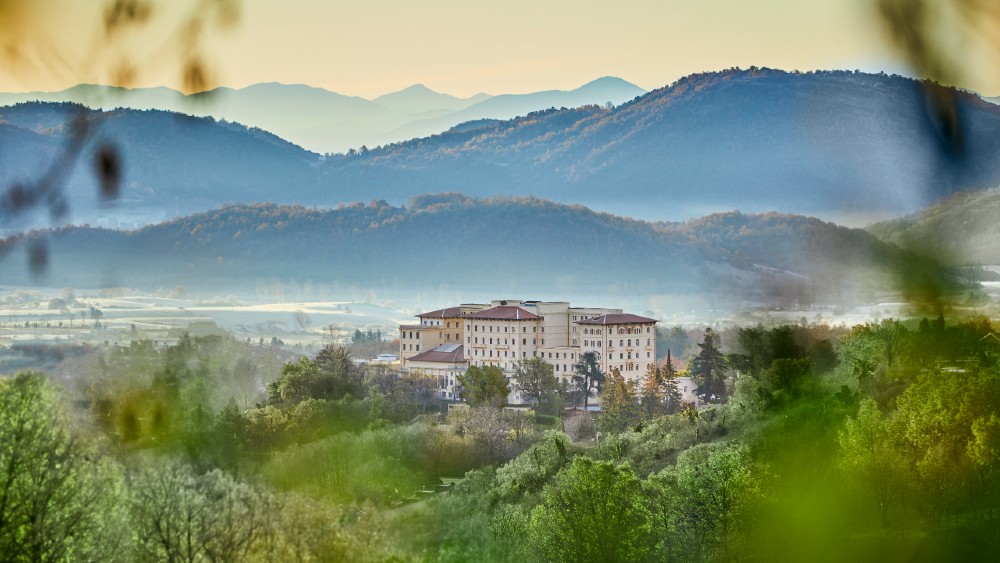 In the exclusive world of luxury wellness retreats, no place has captured Hollywood’s collective consciousness quite like the Ranch Malibu.

Rebel, Selma, Mandy and Connie, among many others, have paid their dues here over the last 11 years. Located on 200 cell phone-free acres in Malibu, the place is best known for its signature “no options” boot-camp regimen and singular approach to healthy cuisine that includes nothing more than a 1,400 calorie-per-day diet—sans caffeine, dairy, soy and gluten, of course. That cuisine has spawned popular cookbooks and pantry items, but it’s perhaps the now -infamous six almonds per-day snack that has continued to serve as one of the longest running jokes amongst self-described “Ranchers” and Ranch critics alike.

Given that that famously restrictive set-up, it’s only natural that for its first international outpost, the Ranch is heading to…Italy, land of pasta, mozzarella and aperitivo? Yes, it’s true. Starting May 15th, the Ranch Malibu will be trading almonds for a low-fat antipasto with the opening of the Ranch Italy at Palazzo Fiuggi.

“We are overdue in expanding to another special location and I think guests are eager to meet and spend time with our expanding globally diverse Ranch family,” Alex Glasscock, CEO and co-founder of the Ranch told Robb Report in an exclusive interview about the opening. “This new destination embodies our values and sensibilities and Palazzo Fiuggi is an extraordinary private sanctuary with world class fitness and spa amenities.”

Set on a 20-acre hilltop park about an hour outside of Rome, with sweeping views over pastoral rolling hills and medieval villages, the Palazzo Fiuggi medi-spa opened in summer 2021 and instantly made news both for its opulent vibe—its chandeliers and marble are a far cry from a typical wellness retreat—and its world-class offerings and facilities, which include an in-house medical and diagnostic center, state-of-the-art gym and wellness cuisine created by three-Michelin-star chef Heinz Beck.

The former palace also offers soaks in natural mineral springs whose wells date as far back as the 14th-century, when it’s believed that Michelangelo frequented the region to indulge in the water’s restorative powers. (With this new partnership, the Palazzo will continue to offer its own programming and retreats as well as that of the Ranch.)

Similar to its Southern California program, the Ranch’s Italian itinerary will start with a gentle 5:30am wake up call to the sound of Tibetan chimes, followed by stretching, breakfast and a daily four-and-a-half-hour timed hike through the Appenino Mountain range. Mandatory nap times and afternoon strength and restorative yoga are also on tap, as are daily massages (because who wouldn’t need a massage after a four-and-a-half-hour hike?)

Limited to just 25 guests per week for the all-inclusive seven-night, eight-day stay, the Ranch’s Italy offering will also take advantage of Palazzo Fiuggi’s facilities by including diagnostic testing, blood panel evaluations and medical consultations. Meals, meanwhile, will include an Italian-spin on Malibu’s “nutritionally dense” organic and plant-based diet. While that likely won’t include a bowl of homemade bucatini all’amatriciana on its low carb, high fiber menu, guests will at least be able to dine alfresco overlooking the mountains and medieval town of Fiuggi below.

“Italy is a very special country,” Glasscock told Robb Report. “The culture, as we know, values balanced living filled with time in nature and slow and joyful eating. We also love the attentiveness and kindness that Italian’s exhibit toward their guests along their detailed and caring focus toward five-star hospitality. Let’s not forget, Italian’s are just plain cool!”

The Ranch Italy at Palazzo Fiuggi opens May 15. Pricing starts at $9,100 per-person for double occupancy and $10,650 for a single room and includes 7 nights and 8 days of accommodations, all meals and most activities, along with round-trip airport transfers to Rome’s Fiumicino Airport.