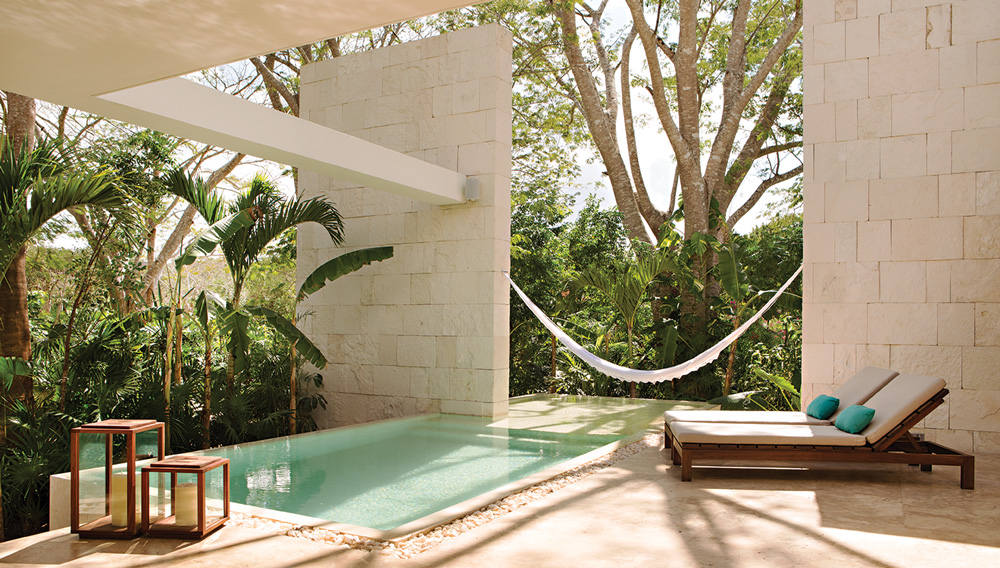 Chablé
True wellness doesn’t come from salt scrubs and back rubs. Wrestling the body, mind, and soul into alignment is hard work. But at the new Chablé resort and spa, which debuted in December in the jungles of Mexico’s Yucatán peninsula, the path to wellness seems an effortless one, requiring little more of guests than open eyes, ears, and minds.

Set on 750 acres outside the city of Mérida, Chablé is a refuge of quiet enchantment—firefly shows at dusk, secret meditation caves, a local abuelita preparing aromatic chicken soup—that invigorates the senses. Each of the 40 accommodations, from the 1,700-square-foot casitas to the more than 10,000-square-foot Royal Villa, has a pool and panoramic glass walls that frame the jungle like a Rousseau painting. Mornings bring birdsong, tea, and fresh fruit on your private terrace. A run or bike ride around the property reveals stone ruins, great lawns, and jungle-cloaked colonial buildings. Raised Mayan garden beds known as ka’anché supply a restaurant that, in addition to a menu by Mexico City chef Jorge Vallejo, features one of the world’s largest private tequila collections.

The sensory adventure continues at the spa, where massages, facials, scrubs, and energy treatments are designed to take guests on one of three Mayan-inspired journeys: Fountain of Youth (rejuvenation), Tree of Life (detox), and Heaven on Earth (heart opening). The 14 treatment rooms hover above one of the area’s natural cenotes, freshwater holes that are linked by subterranean networks of rivers and caves. A full gym, personal trainers, and an intense temazcal (sweat lodge) experience push guests’ physical limits.

Those truly looking to explore their boundaries should ask for spa therapist Yamuna, a Mexican energy guru who first learned Eastern medicine at his Chinese grandmother’s knee. “We don’t recommend Yamuna to everyone,” says Abigail Rivera, director of operations for Chablé’s management company, Hamak Hotels. “You have to be ready for him.” Indeed, the therapist digs deeper than most as he works out muscle—and mind—aches with treatments that might include a walk to see Chablé’s sacred ceiba trees. The smallest trees, Yamuna points out, are covered in sharp, protective thorns, but as the ceiba grows stronger, the thorns recede and eventually disappear. For Chablé’s guests, just a few days rooted at the resort is enough to soften sharp edges—and sharpen dulled senses ($1,040–$8,900).—Lisa Sweetingham

The Lanesborough Club & Spa
Try as they might, city hotels rarely achieve spa greatness. But the Lanesborough, London’s venerable Hyde Park hotel, has reached next-level wellness with its new member’s club and spa. Opened in March in an 18,000-square-foot subterranean space just off leafy Knightsbridge, the opulent facility dressed in peacock-blue satins, emerald-green silks, and rich wood paneling is just as suited for a personal-training session and cold-pressed juice as it is for a massage and a cocktail.

Those approved for the club’s membership have at their fingertips top-tier industry brands like La Prairie, Ila, and Bodyism. For nonmembers, the only way to experience it is by booking a night at the equally extravagant hotel ($7,500 per year, plus $2,500 joining fee).—Jackie Caradonio

Oberoi Sukhvilās Resort & Spa
With the opening of this 20-acre retreat hidden away in the Himalayan foothills, India’s Oberoi Group proved it can do destination spas just as flawlessly as it does palace hotels. The brand’s first foray into wellness is an oasis of landscaped courtyards, colonnaded verandas, reflecting pools, and ornate fountains—all centered on a 12,000-square-foot spa that specializes in therapies from both Asia (ayurveda and chakra balancing) and Europe (La Prairie facials and Roman baths). Oberoi’s trademark splendor is on display at every turn, from the four-poster beds and gold-leaf frescoes that adorn the royal tents to the domed rooftops and Rajasthani-style archways that dot the manicured grounds ($525–$7,500).—Margot Bigg

Magee Homestead
Folks usually head to Wyoming ranches to get their hands dirty. But at Magee Homestead, the new resort-within-a-resort at Brush Creek Ranch, it’s all about clean living. The nine-cabin retreat offers a healthful antidote to cowboy life, bringing Vermont’s Tata Harper and New York’s Naturopathica to Big Sky Country. Though grotto soaking pools and Pilates classes might seem incompatible with this rugged region, a closer look at the spa’s therapies (using local ingredients like wildflowers and mud) and the restaurant’s menu (Akaushi-beef burgers and fresh-caught trout) reveals something for even the most rough-hewn rancher. Die-hards can still get their hands dirty on the 15,000-acre Brush Creek property, and after a long day of riding, angling, hiking, and shooting, they might even succumb to an aromatherapy massage or mud wrap ($875–$1,500 per person)—J.C.

Inside the Ritz Paris’s New and Improved Spa